SUNDAY MAY 30 – STEPHEN GOWANS – ISRAEL, A BEACHHEAD IN THE MIDDLE EAST: FROM EUROPEAN COLONY TO US POWER PROJECTION PLATFORM 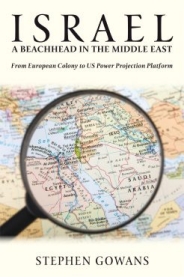 One US military leader has called Israel “the intelligence equivalent of five CIAs.” An Israeli cabinet minister likens his country to “the equivalent of a dozen US aircraft carriers,” while the Jerusalem Post defines Israel as the executive of a “superior Western military force that” protects “America’s interests in the region.” Arab leaders have called Israel “a club the United States uses against the Arabs,” and “a poisoned dagger implanted in the heart of the Arab nation.”

In his latest book, Israel, A Beachhead in the Middle East, Stephen Gowans challenges the specious argument that Israel controls US foreign policy, tracing the development of the self-declared Jewish state, from its conception in the ideas of Theodore Herzl, to its birth as a European colony, through its efforts to suppress regional liberation movements, to its emergence as an extension of the Pentagon, integrated into the US empire as a pro-imperialist Sparta of the Middle East.